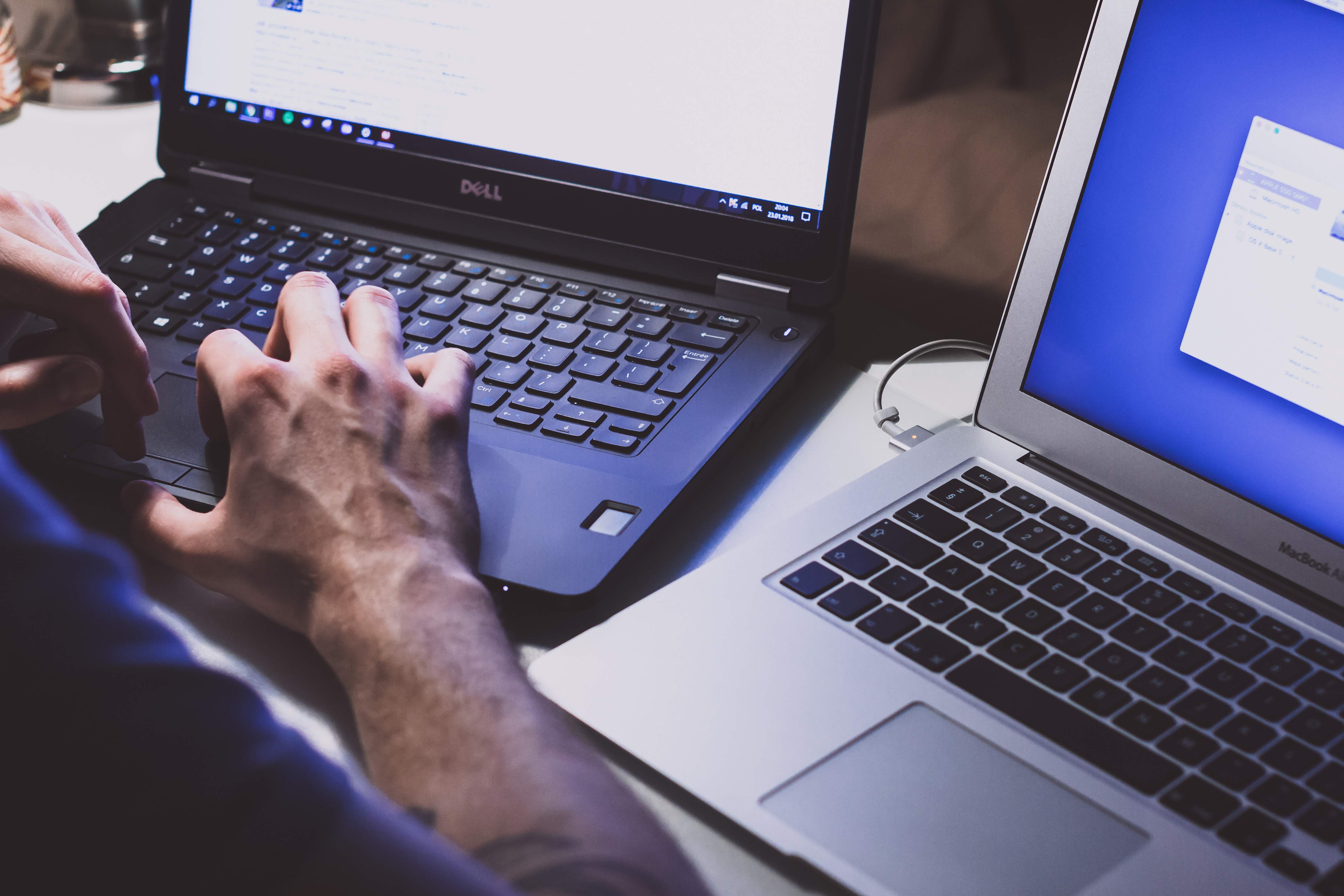 A few years back I wrote an article for our old website outlining some things to consider when contemplating buying a new computer. That article never made it onto the new site and is now woefully out of date, so this is my attempt at bringing the spirit of that article into 2019 and beyond (for a bit at least). Here is our updated buying advice.

The place to start is always exactly what TYPE of device is going to be best. The choices are quite plentiful and therefore confusing. Should you get a PC or a Mac? A laptop or a desktop? Maybe even a tablet rather than a computer? All good questions and in truth, there is not one correct answer. Like with many things in the computer world, and in life in general, it depends.

First let’s discuss the Mac v PC question. Those who use Macs swear by them – those who don’t wonder what all the fuss is about. As someone who uses both, I thought it would be good to bust a few myths:

Macs just work. To a point, yes they do, but there is more to that statement than meets the eye and I would be lying if I said that I haven’t had any grief with Macs. Added to that, they do have their own unique issues – Macs unique designs mean they are prone to overheating and component failures and this means invariably expensive repairs – more so than their PC equivalents.

To give an example, this week we have quoted for mainboard replacements for a Macbook Pro and a Lenovo Yoga – both 2016 models. The former was for £400, the latter for £180. Bottom line is Macs are more expensive to buy and more expensive to repair and that is an important consideration. Which leads us onto…

Macs use more expensive components and that is worth paying for. I would agree with that if the extra could be accounted for just in the cost of components, but there is an additional premium that goes beyond just the component quality. For instance, look at the price differential between a 13” Macbook Pro with 256GB SSD (£1610) and a 512GB SSD (£1780)*. That’s a £170 difference.

However, if you were to go on any website that sells computer components, the difference in cost between those capacities of SSDs is far less than that – between £25 and £50 depending on model of SSD. Essentially, you are overpaying for the upgrade.

Macs are more secure and don’t need antivirus. Wrong, wrong, wrong! Yes, most (but not all) viruses are aimed at Windows machines, not because they are inherently less secure but because there are more of them and the impact is greater. However, there are Mac specific viruses and a recent Macworld article listed some of the current known threats. But many threats are not necessarily linked to the OS or hardware you are using. Web based threats can affect users of any device. Macs don’t inherently prevent you from receiving scam emails, they don’t prevent phishing, they don’t prevent dodgy websites and ads etc.

The other thing to consider is that more and more, we are using lots of different devices on our networks and Macs can be carriers of all sorts of nasties that can be transferred to other machines if they are not properly secured. Macs are often the weakest endpoints on a network because people think they are secure without having to do anything. This is out of date thinking.

At RedFez we have to make sure our Macs are secured in case they pick up something that might affect the whole network. Plus, if you are running a domain based network in your business, then Macs will not play well with it at all.

What’s more, you’ll have less control over the Mac based clients which presents an added risk to your organisation. In short, if you’re running a business, don’t get a Mac unless there is an overriding reason and strong business case why you should have one. And if you have one, it must have some form of endpoint protection installed.

Macs are easier to use. If you’re a Mac user, yes, but not if you’ve used Windows all your life. It’s the same when talking about iOS v Android. It’s familiarity that makes any operating system easier to use. There are some things about the Apple way of doing things that drives me nuts and there are some things about Windows that are equally frustrating. But I can say, hand on heart, the Mac isn’t inherently easier. I’m more used to Windows and it is where I feel more at home

That said my Macbook Pro is lovely to type on in a way that a cheap laptop can never hope to aspire to. That said, when I’m using my Macbook, it’s often on a remote desktop connection to my PC. Go figure! But then, comparing a cheap laptop to a Macbook isn’t like comparing apples to apples. There are high-end laptops out there to rival Apple for quality.

My advice is to get hands on and try some different laptops if you can – failing that, check out the reviews and see what others have to say about the quality and feel of a device. We were impressed recently by the Lenovo Yoga 530 and that is a product that is a lot cheaper than a Mac.

So, with the ubiquitous Mac v PC debate out of the way (I wish) what about laptop (or Macbook) v Desktop (or iMac). This one’s easy. If you need portability or you do not have room for a desktop then a laptop is the way to go. But desktops are much better value, easier to upgrade and easier to repair. So they should be your default purchase for any serious use. Laptops are not built for working at 8 hours per day.

If you need a combination of both – i.e you’ll be working at a desk for a lot of time but need to take your machine on the road then look for a laptop with docking capabilities so that at your desk you can use an external keyboard and mouse and multiple monitors. Dell excel at this with some great laptops that make use of the proprietary Dell docking port or the USB-C connection. You’ll pay a premium, but in this instance the benefits, especially to your health, are worth it.

So where do tablets fit in? Quite simply, they are not really serious business machines. Again central control of them is difficult and being tied to a personal user account can make them hard to share amongst users in a secure and auditable way. They are great complimentary devices in a business context and good in certain applications but will not fully replace a proper computer. Try typing on a tablet for 8 hours and see how you get on!

At home for casual browsing, viewing photos, playing games etc they are great and if that’s all you want to do then a tablet will be great for you. But for any serious work, you’ll need something more traditional!

So having decided what type of device you need, what about specifications? How much memory do you need? What about processor speed? How about the size of the hard drive?

Well, let’s talk about hard drives first. This is one of my pet peeves, so I need to get it off my chest. These days, you shouldn’t consider buying a new computer, especially a Windows one, unless it has a Solid State Drive (SSD) installed. These are modern, faster equivalents of the humble hard disk drive (HDD) that has been with us for as long as the PC has. This is the best piece of buying advice above all others.

The traditional hard disk drive contains a stack of spinning disks (not unlike a pile of CDs or DVDs) with an arm that reads and writes the information on the disks. It’s old technology….and slow. Processors and computers in general have got faster and faster but the hard drive has not been able to keep pace. The result is it becomes the bottleneck in your system. Your computer ends up not being able to read the information on the disk quickly enough so it effectively grinds to a halt. So if you’re wondering why that computer you bought only six months ago is running like a bag of spanners you’ve probably got an old fashioned spinning hard drive in it.

Now, there is a trade-off. SSDs are more expensive than HDDs which means that up until recently, SSDs have only featured in mid to high end systems. However that price differential is now a lot smaller. At the time of writing a basic 1TB HDD costs around £50, its SSD equivalent about £100. Still more expensive, but the difference is such that it really isn’t worth saving the £50 and going for something that will be almost unusable within months.

However, manufacturers still insist on loading low to mid priced laptops with large capacity HDDs rather than a slightly smaller but far more effective SSD. Essentially, a 512GB SSD in a laptop will work better than a 1TB HDD for the same price. So, bottom line, don’t buy a computer without an SSD. Essentially this means avoiding the cheapest laptops and systems, but it’s false economy to do otherwise.

As for specs, unless you are expecting your machine to do some serious work (gaming, video editing/rendering, audio recording, file compression, server etc) even the slowest modern processors will cope with most of what you throw at them. You don’t need the highest spec processor. I would always spend money on getting the lower specced machine with an SSD than a higher specced machine without one.

Intel Core i3 processors are great everyday workhorse machines, i5s are recommended if you have the extra budget, i7s and i9s should really only be purchased if you know you why you need the extra power otherwise it is overkill. AMDs equivalents are (respectively) Ryzen 3, Ryzen 5, Ryzen 7 and Threadripper and are equally as good.

In terms of RAM do not consider anything below 4GB although we would recommend 8GB. If you can afford 16GB then do so as this will keep your machine up to spec for a while. Laptops are getting increasingly difficult to upgrade these days so unless you are prepared to take the back off or pay someone else to do it, it is best to load it up with as much RAM as you can afford. Desktop PC users have it a little easier. As I said earlier, desktop machines are much easier to upgrade.

A quick word about all in one machines (which includes iMacs). My personal view is avoid them. You get all the drawbacks of a laptop without the positives. That is, they are difficult to upgrade, everything is in a tight space making overheating and component failure more likely yet you don’t get the trade-off of portability.

So, there you go. There are my thoughts on buying a new computer. Hopefully with this buying advice, your next purchase will be a little easier than the last and you’ll end up with the right product for you. Don’t forget to get in touch if you have questions.